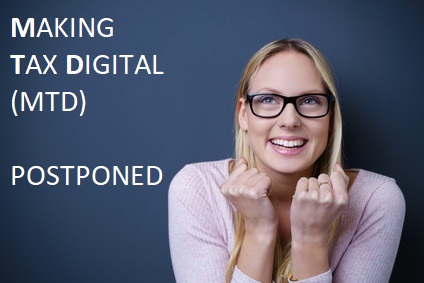 We have some excellent news – Making Tax Digital(MTD), the coming burden that many self-employed people were unaware of, has been postponed until at least 2020 (and hopefully permanently.)

While improving systems and more up-to-date data for small businesses is recommended, there were many issues with MTD and the original timeline.

As I reported back in September 2016, MTD would create an enormous burden on micro-businesses – one person running a business themselves from home is somewhat different from what people actually perceive to be a small business.

When someone is doing all the jobs themselves running a micro business they don’t have any extra time to waste.

Instead of the one annual tax return now that can be submitted more than 9 months after the year-end, small business owners would be expected to submit 5 tax returns a year – 4 quarterly ones during the year taking time away from the business as well as a final one after the end of the year.

As it was reported that the data in these quarterly returns would be ignored, it would have meant changing working patterns just to fill in forms with no benefit.

The waste of time was so severe that some online commenters even proposed that as fines were only charged for late quarterly returns, but not for the contents of the quarterly returns, then time-pressured small business owners may just submit every quarterly return showing income £2, expenses £1 and then submit the actual true figures on the final fifth tax return!

It was also proposed that people would have to keep digital records rather than the accurate and efficient systems they had developed over several years. At one point even spreadsheets would have been banned.

Now, finally, after many months of worry for taxpayers and wasted expense we have some sensible news:

– only businesses with a turnover above the VAT threshold (currently £85,000) will have to keep digital records and only for VAT purposes – they will only need to do so from 2019.

– businesses will not be asked to keep digital records, or to update HMRC quarterly, for other taxes until at least 2020.

While this gives time for the systems to be developed, hopefully the 2020 date will be dropped as more people become aware of the burden it would place on their productivity.

Another claimed benefit of MTD was auto-population of tax return information, such as from pensions or investments. However, as you still have to double-check that the automatically filled in data is correct when signing the tax return then this reduces the actual benefit if the data can’t be relied upon.