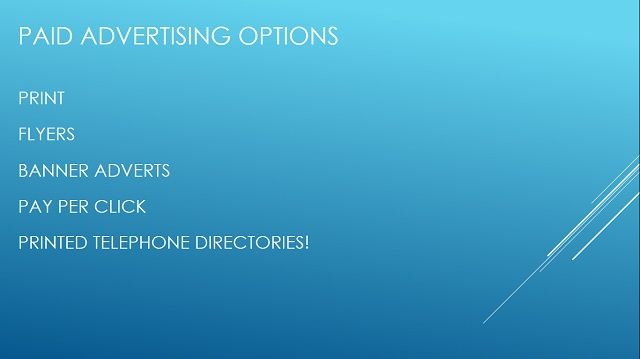 As a business owner, there are a huge number of options on where to spend your marketing budget, but also some pitfalls.

We’ll cover some of the more popular paid advertising options.

By the end you will have an understanding of the options when it comes to paid advertising, and be able to consider whether they could work for you.

Print
In the past the main option for paid advertising was in Newspapers and Magazines.

With the national options these were very expensive, so that left local publications. When using a local publication, you have to choose one that you think will be read by your target audience. Then you will need to have an advert designed so that it easily transmits the message to the client.

Unfortunately to get the most benefit from advertising such as this you have to keep an advert running for a number of weeks or months, so that people build up an awareness of your business. That’s something that larger businesses with an established marketing budget can do, but when you are starting out you will likely be restricted.

One thing to be aware of when dealing with advertising sales departments is the last minute offer – not everyone pays the same price, so if they have space to fill before a publication you may be able to secure a discount.

With local magazines you could find that the results are delayed. People may see your advert and cut it out, ready to use later. Indeed, I have had one new client a whole year after I placed an advert.

Flyers
Flyers are another traditional method of advertising, however there are a couple of issues:

1) The cost of production, both in the artwork and the printing of the flyers.

2) Distribution – this can be a real problem. Do you go with a very expensive company that will hand deliver your flyer on its own using gps tracked staff, or do you choose a bulk delivery company that will either put it into local magazines and newspapers along with others?

The danger with multiple flyers in a publication is that some people just empty them all into the recycling bin without even looking at them. I mentioned earlier about the large costs that can be incurred when you are looking at numbers.

Banners
Moving online we have banner ads, where you pay to have your advert displayed on various websites. There is a cost of design as well as the advertising fee.

However, the great increase in ad blocking software means that they may not even be seen. In other cases, people have mentally blocked out adverts when they are looking at a site. So although you may be getting what is recorded as a view, people might not have actually looked.

Pay per click
This has the potential to bring in good sales, but also to blow a lot of money if you don’t understand what is involved.

Always set a limit on how much you are going to spend, ideally by ‘topping up’ your account rather than letting it have access to your card directly. Otherwise you could get a nasty surprise and find thousands have been spent.

There is also a small potential for competitors to rack up fees by clicking on your adverts.

You will also be competing online with much larger companies so sometimes the cost per click can be way outside your budget.

Printed telephone directories!
These were a source of business in the past, but with several countries having already discontinued their own directories it is not something to be recommended.

There was a long time before the advert went out, so if you had changed phone number or address in the meantime the wrong information was in the directory.

The costs were also very large, and I mentioned the person who had spent £15,000 on adverts, but was not able to attribute any direct results at all to that spend.

Do be aware that it is possible to spend large amounts on a nice looking but ineffective campaign.

As always, you must target the place where your clients are likely to be, rather than you would like them to be.

Sometimes you won’t like the way the advert looks yourself, but if it brings in results then it is successful.