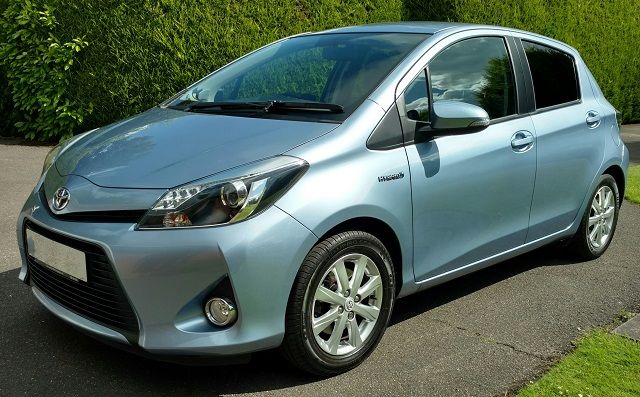 With the great increase in hybrid car sales recently, you may be considering one in order to reduce your motoring costs.

One model often overlooked is the Toyota Yaris Hybrid, I’ll cover the advantages as well as the differences from a normal petrol car.

The City Prius?
If you open the bonnet of a Yaris Hybrid you will find a familiar engine: 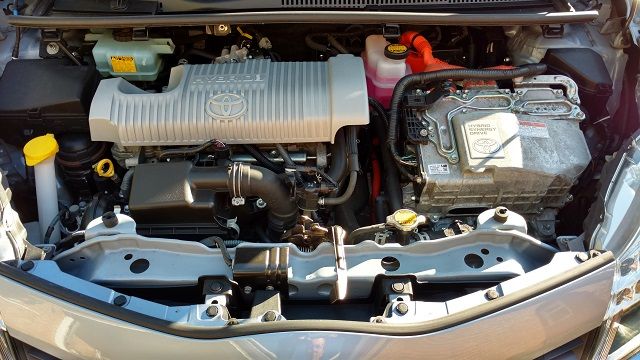 It’s the same engine you will find in the US market Prius C or the Japanese market Toyota Aqua.

As with other Toyota Hybrids there is an electric motor and a petrol engine which work together for improved emissions, economy and performance. 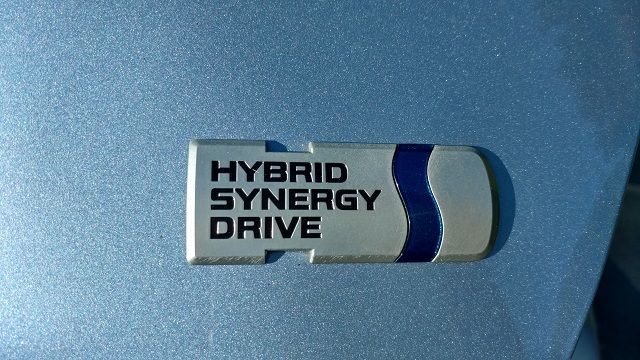 This video shows how the two engines work together depending on the driving situation:

Realistic MPG?
Before I come onto the other benefits of the hybrid system, the number one question people have is usually concerning fuel economy.

After driving a hybrid for some time, the answer is… it varies, a lot.

I’ve seen results for individual trips varying from 50mpg up to 75mpg.

However you can come up with a comparable figure by taking the full tank economy average.

Over varying routes that combine city driving, country roads and a significant proportion of 70mph motorways, the result I’ve regularly achieved is: 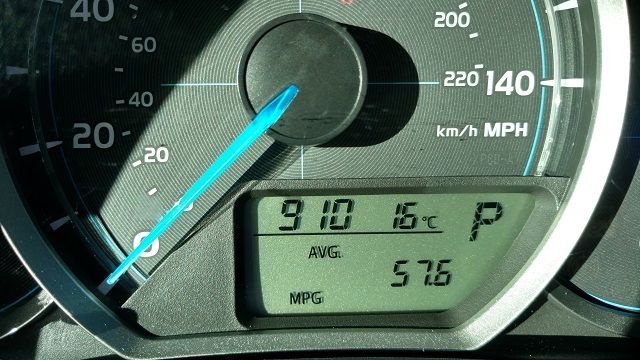 The onboard computer usually overestimates the result by 2 mpg, so the actual tank average is right around 55mpg.

Whilst some way from the official fuel economy figure of 80mpg it compares well to similar petrol automatic cars that I’ve regularly driven on the same roads, such as the Honda Jazz and Honda Civic automatic:

However, it is possible to significantly improve on the average fuel economy figure, conditions permitting.

The Yaris Hybrid gives you a lot of economy information on the main instruments as well as on the second display screen: 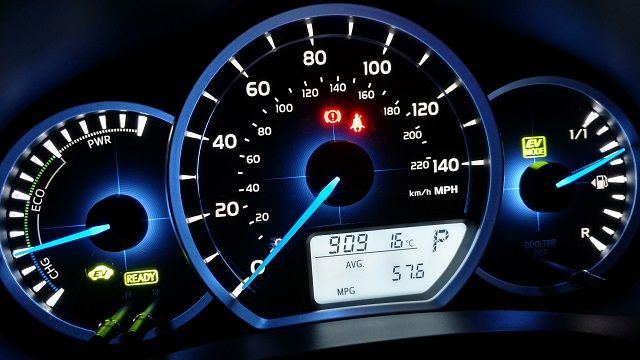 The energy dial shows how much power you are asking for, or regenerating. 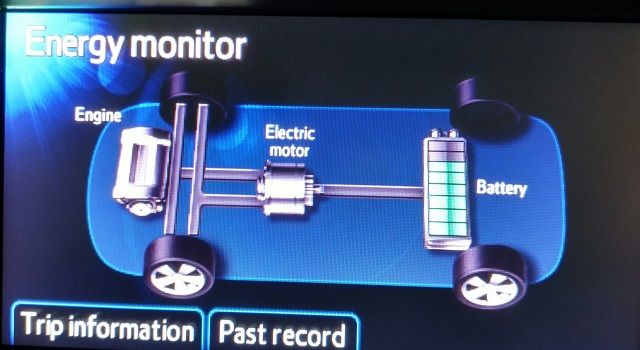 The energy display shows which engine is using or generating power. 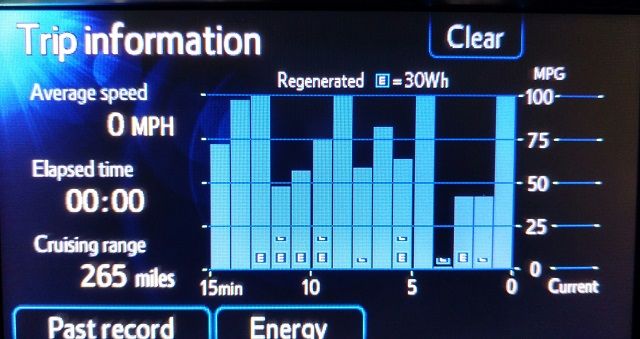 The single trip display shows how your economy varies with conditions. 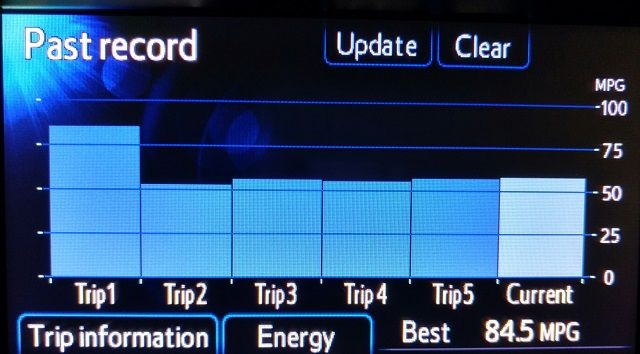 The past record shows how your average has changed over multiple trips.

The four main factors that affect the MPG result are:

1) The weather – in the summer hybrids get better MPG as they can run their electric air conditioning from the battery without having to start the petrol engine. However in cooler weather the petrol engine has to be started to provide heat for the cabin, and also to keep the emissions system up to temperature.

2) Length of trips – shorter trips will result in poorer MPG, as a larger proportion of the time is spent with the engine warming up and using more fuel.

3) Acceleration – there is a significant effect of using the eco acceleration range on MPG, rather than the power range

4) Cruising speed – lower is better, for example driving at 55mph instead of 70mph sees economy climb from 57mpg to: 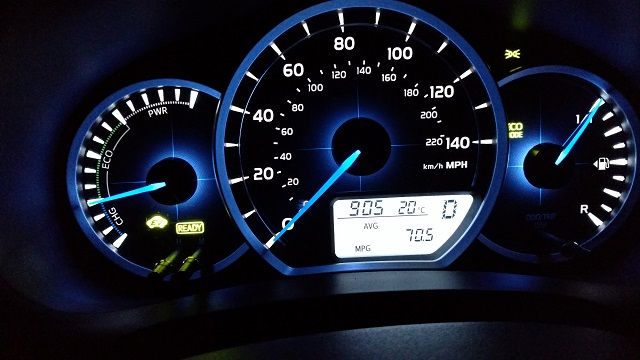 One quirk of hybrid cars – more traffic congestion actually results in better MPG rather than the other way round for a standard car.

You can read some of the more advanced hybrid economy tips by clicking this link, however for many people just driving the car will result in much better mpg than an equivalent petrol automatic – without having to think about it.

There are a couple of buttons in the car, that you may not have seen before: 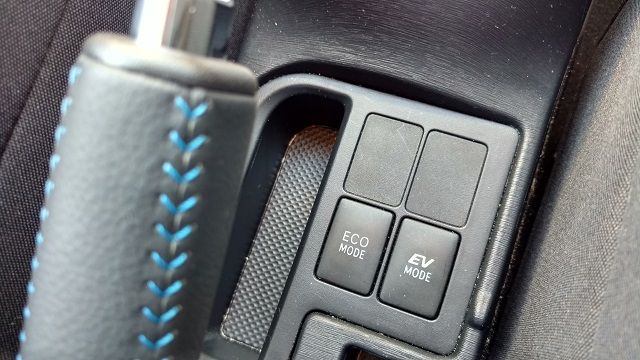 EV(Electric Vehicle) mode is useful for moving the car short distances, such as in and out of a garage or when you are parked and don’t want the petrol engine to start. However, for normal driving it is best to let the car decide when to switch between EV and the petrol engine automatically. This usually results in better MPG.

The ECO(Economical) mode changes the accelerator sensitivity, however also reduces the power of the air conditioning which I found to make it somewhat ineffective in the hotter summer months and as a result don’t use it. Eco mode tends to favour recirculating air in the cabin to reduce power demands, but it can make it a bit stuffy.

Reduced Running Costs
Because the computer is controlling the power delivery the stresses on tyres/etc. are less and as a result the overall maintenance costs are lower than an equivalent petrol car.

People sometimes worry about the hybrid battery pack ‘wearing out’, but it is designed to last the life of the car. The computer actually keeps the charge level between 20% and 80% and as a result the battery lasts much longer than if it was fully charged and discharged.

There is also a warranty on the battery and this is extended for a year every time the car is serviced at a main dealer, up until it is 10 years old.

Even outside warranty, the battery packs are only a similar cost to a clutch and flywheel on a normal car. They are sealed in a pack that is about the size of a carry on suitcase, and are located underneath the rear seat, so don’t affect interior space.

Because the car has two engines, the wear is spread out. Over 10,000 miles of driving the petrol engine may only have been running for 8,000 of those – with the rest done by the electric motor.

When braking the car uses the motor in many cases to slow down, so also saving on brake pad & disc wear as well.

As well as reduced servicing costs, reliability is increased due to the computer control of the synergy drive.

The ‘gearbox’ – better, but different
The car doesn’t actually have a gearbox, the gearstick on the floor could just as easily be a small joystick as in a regular Prius – it doesn’t physically connect to anything. The car has what is called a Power Split Device – however this does behave similarly to a CVT transmission.

Because there are no normal gears it means that the car can produce the most efficient combination of power sources for the conditions. This applies whether cruising or requiring performance.

The difference to a normal gearbox is that the car does make noise when accelerating, particularly uphill or when joining a motorway. However this also means that in many other situations the car is much quieter than a normal one.

You will however notice that the engine revs vary while you are driving along what you may have thought was level ground – it is just the car responding to actual changes in elevation that require more power to keep the speed constant.

Comparing the gearbox to the Jazz, which has an actual CVT, unfortunately the Jazz is hampered by 7 virtual gears that make it act like an old style gearbox and as such you lose the benefits of CVT infinitely variable transmission.

For the Civic, this has a traditional 5 speed gearbox but with no electric motor to fill in torque when the petrol engine is at low revs I found it to be quite frustrating as it was highly geared.

This video clears up some of the myths regarding hybrids:

Fun to Drive
The modifications made to the standard Yaris have also resulted in making the Hybrid version fairly sporty:

2) The hybrid battery pack fitted under the rear seats – also lowers the centre of gravity and again improves handling.

I’d rate the handling above that of the Fiat 500 and Mini Cooper that I’ve driven.

One other benefit of the hybrid system is the removal of lag. In a turbocharged car there is a delay, particularly at low revs, from pressing the accelerator and the car accelerating.

In a hybrid there is no delay – you instantly get assistance from the electric motor while the petrol engine revs up ready to deliver power together with the electric motor. In effect the hybrid system operates like an electric turbocharger with anti-lag.

The UK models of the Yaris Hybrid also appear to be fitted with quality brand performance tyres as standard – rather than Low Rolling Resistance(LRR) ones that can reduce performance.

The standard Yaris before these modifications was already a safe car with the standard stability control, brake assist and other safety systems:

Summary
If you are undertaking trips of a reasonable length then there can be good reductions in the amount you will be spending on fuel by changing to a hybrid car.

Combined with the reduced servicing costs and increased reliability you could find that your total expenditure on transport with a hybrid car is significantly reduced, freeing up much-needed funds for the business. 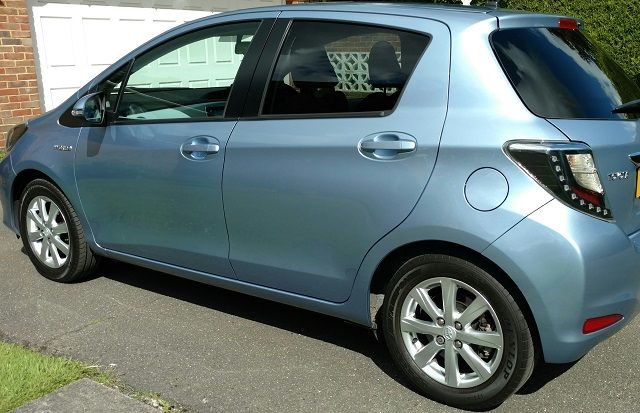