An extract from my second book, Power Climb: Growing Your Small Business which was published in 2012.

Websites should evolve over time, and it is good to regularly review yours to make sure it is up to date.
Many sites have a ‘current news’ section or a blog. It’s important to remember that if you have these sections, you will need to plan to ensure that you are going to regularly update them. A top news item from last year, or a blog with only a couple of postings in the last few years are actually going to count against you in people’s impressions.

What would you think if you were in the waiting room for a business and the newspaper or wall calendar was a year old?

You can also look back in time at your own and competitors websites using something called the Wayback Machine – a site that archives web sites.

Looking up taxhelp.uk.com I found that their archive goes back to 2007, which is useful in chronicling the site since then.

Using my own site as an example, I can show the evolution of one site and how things need to develop constantly in order to stay up to date:

2007 – I was using a site that I had written myself. Whilst providing all the relevant information a potential client would need, this lacked the professional polish that a web developer would bring.

2008 – Saw the commissioning of the new website, at considerable cost. Whilst this looked good, I could no longer update the site myself – something that’s important with the constant changes occurring in tax. However, an introduction back in 2008 by the web developers actually turned out to be the company I used in 2012 for the latest update.

2009 – This saw a return to my own ability to update the site, having purchased professional web design software myself and learnt how to use it. It also saw the introduction of video on the site, with several videos I had shot to further explain the service being used.

2010 – With the emergence of social media this saw more options on the site for sharing, as well as links to several of my online profiles.

2011 – Blogging has been something I’ve done since 2009, so it made sense to integrate this to the taxhelp.uk.com website – so that I can provide tips that can be useful to clients, as well as keeping them up to date. It also saw the introduction of the trademark.

2012 – The site was completely redesigned, giving a much improved site for the next stage of the business development.

Looking back to 2007, it’s amazing how far my own site has evolved from the early days

When you are working on your website content, it’s important to remember that online claims are now covered by the Advertising Standards Authority.

The ASA’s online remit now extends to cover companies’ own marketing claims on their own websites and in other non-paid for space they control. This brings enhanced consumer protection, and we have already seen companies taken to task for unreasonable claims in their marketing.

You can also download the full kindle version straightaway from Amazon by clicking here. 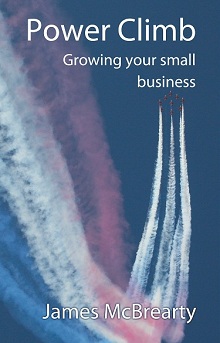